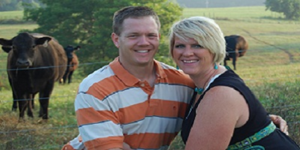 Beam Family Farms is located in a the small rural community known as Delight, North Carolina (30 miles north of Shelby). Owners Luke and Kathy Beam lived the first ten years of their marriage in the same house Luke’s great, great, grandfather built in 1870! In 2009, they built a new house beside the old home place and still live there today!

The family farm has changed quite a bit in the last 240 years. In the early days, it provided food for the Beam family and was essential to survival.

Luke’s grandfather established a dairy operation before the turn of the century, which was expanded and managed by Luke’s dad, Charles, throughout his lifetime. Like many other family-owned dairies across the country, Beam & Beam Farms suffered several very tough financial years. Cow numbers dwindled and equipment grew old. After his dad passed in 1999, Luke decided, after much prayer and deliberation, to sell the 30 Holstein cows remaining on the farm.

It was at this time Luke began to develop a beef cattle herd using the the cows his mother still owned. From a small beginning in 1999 of 20 crossbred cows, they began breeding to Gelbvieh bulls and growing a beef herd. As of today they have 180 cows. Today, Beam Family Farms is capitalizing on current trends by supplying healthy, grass fed beef direct to the consumer. They focus on what they refer to as the “4-G” program – Guaranteed Grass-Grown Gelbvieh Beef. Luke chose the Gelbvieh breed to serve as the foundation of the herd because Gelbvieh cows are known as the “mother breed” of beef due to their keen mothering instincts and abundant supply of milk. Their cattle are raised the way nature intended – in pastures for the duration of their lifetime. This means no hormone injections, no antibiotics, no fattened up grain-fed beef .In addition to their delicious all-natural beef, Beam Family Farms sells free-range veal and pork. It is produced humanely and cooks up white and delicious. For the family dog, there are frozen pet bones and treats.

Luke and Kathy invite you to taste and see the difference in their beef yourself!