Phyllis Feaster is known for her talents in the kitchen, especially when it comes to creating delicious cakes, pies, cookies, breads and candies. By her own admission, Phyllis avoided learning to cook as a child. She grew up in the Double Shoals community during a time when families churned their own butter, canned their own vegetables and raised their own hogs. Her mother Vuna Albertson stayed busy in the family kitchen. Phyllis fondly remembers flour being strewn about and the smell of freshly-baked peanut butter cookies welcoming her home from school. “Mother tried her best to teach me to cook”, Phyllis says, “but I didn’t pay attention”. Mrs. Albertson continued to do much of the cooking for the family until her death in 1981. That Christmas, Phyllis faced the dilemma of how to provide the family with its traditional holiday feast, and decided to take on the challenge. Out came the recipe books, and Phyllis was on her way. She has experienced occasional flops in the kitchen over the years, but few she’ll talk about.

Phyllis really doesn’t like cooking most foods, she admits, but has developed a passion for making desserts. Baking, Phyllis says, is so relaxing… often taking her into her own little world. She especially enjoys modifying standard recipes to suite her taste, making them her very own. “Some of my recipes I’ll share”, says Phyllis, “and others I won’t”. But she is writing down all of them in a recipe book for her two granddaughters, both of whom have shown promise in the kitchen. Perhaps the ability to bake is genetic… the girls’ father, Reggie, had mastered Phyllis’ chocolate chip cookie recipe by age 12, and sold baked items to earn extra money during his college years.

Phyllis was a vendor for a while at the farmers’ market, but found the demands of the market to be too time-consuming. She quit to spend more time with her family. Phyllis started her home-based business, “Phyllis’ Sweet Shop” after she retired from 32 years in the Shelby school system. Her son, Reggie, now operates Phyllis’ Sweet Shop. Reggie manages the business and makes the baked goods himself.

They offer anything from candes, trail mix, to cupcakes. The fried apple pies and the cheese wafers are the best sellers, but are Reggie’s least favorite thing to make. “They’re the most time consuming to make,” said Reggie. His favorite thing to bake is the caramel cake because it is least time consuming. Phyllis’ Sweet Shop sticks with making old fashioned desserts. “It is food that your grandma would make”, said Reggie.

To prepare for the market they start cooking on Tuesdays. They cook roughly ten hours a day for four days a week. If you cannot make it to the market you can always stop by their store. Phyllis’ Sweet Shop is located at 125 N Trade Street in Shelby, NC.

Come on by and try Phyllis’ famous fried apple pies at their store or at the Farmers’ Market ! 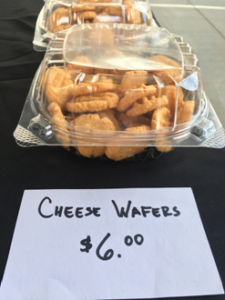